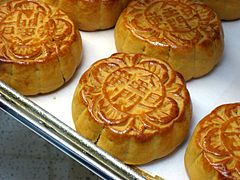 Maybe I’ve mentioned it before, but anyway. The Moon Festival falls on the 15th day of the 8th month of the Lunar calendar so we’ve had tons of moon cakes during the past week.

The time really does fly. I remember meeting Ava back in 2002 and the year and half before we got married. Our weddings in ZA, Tainan and Taipei, what a busy year that was. And now four years down the road, it’s the three of us rather than the two of us only.

Ava’s oldest sister and Rice looked after Christina on Thursday evening and Ava and I went to the Pot Pie Cafe for dinner. Just a relaxing evening together and a chance to sit down for a chat and focus on each other, we even went to the stationary store nearby and Ava commented how it’s a treat just being able to do that without Christina pulling everything off the shelves. Although we love her to bits of course.

Don’t forget to check our movies and photos (both recently updated).

A colleague of mine is going to Durban to meet with a customer who is on Essex Terrace at:

Can anyone suggest any good B&B’s in the area, there will be three or so people for two nights. I can’t remember exactly where Essex Terrace is (Westville North somewhere, right?) and Google maps doesn’t have great maps of Durban.

Leave your suggestions as comments on this post if possible. And links to websites if possible.

Update (11 May 2010): Josh (in the comments below) alerted me to a shortcut to switch between traditional and simplified input, just use ctrl+shift+t to switch. Thanks Josh

I got a request from Rebecca, who found a comment that I had made about installing the Google Pinyin tool. She emailed me and asked me to show her how to change the google input method tool to Traditional Chinese. I’m chuffed someone asked so nicely. So here you go…

For those who want it go to http://tools.google.com/pinyin/ and click on the “big blue button” to download it.

Install it the usual way. And continue when finished.

From the language bar, click the “EN”, then select “Chinese (Simplified, PRC)” to change the language.

The Google Pinyin toolbar will appear.

Select the fifth tab then make sure the second option (for Traditional Chinese) is checked.

Click “Apply” to apply the changes, or “OK” to apply and exit the options page.

From the language bar, click the “EN”, then select “Chinese (PRC)” to change the language.

Right click the blue ball part of the Google bar, and select the item shown.

Click “Apply” to apply the changes, or “OK” to apply and exit the options page.

All the characters that appear when using the tool should now be Traditional Chinese. The characters in all the menus and options remain in Simplified Chinese.

Today is Tomb sweeping day, April the 4th is a public holiday. Here is all the low down on this long celebrated Chinese festival.

Celebrated two weeks after the vernal equinox, Tomb Sweeping Day is one of the few traditional Chinese holidays that follows the solar calendar– typically falling on April 4, 5, or 6. Its Chinese name “Qing Ming” literally means “Clear Brightness,” hinting at its importance as a celebration of Spring. Similar to the spring festivals of other cultures, Tomb Sweeping Day celebrates the rebirth of nature, while marking the beginning of the planting season and other outdoor activities.

Qing Ming Jie in Ancient Times
In ancient times, people celebrated Qing Ming Jie with dancing, singing, picnics, and kite flying. Colored boiled eggs would be broken to symbolize the opening of life. In the capital, the Emperor would plant trees on the palace grounds to celebrate the renewing nature of spring. In the villages, young men and women would court each other.

The Tomb Sweeping Day as Celebrated Today
With the passing of time, this celebration of life became a day to the honor past ancestors. Following folk religion, the Chinese believed that the spirits of deceased ancestors looked after the family. Sacrifices of food and spirit money could keep them happy, and the family would prosper through good harvests and more children.

Today, Chinese visit their family graves to tend to any underbrush that has grown. Weeds are pulled, and dirt swept away, and the family will set out offerings of food and spirit money. Unlike the sacrifices at a family’s home altar, the offerings at the tomb usually consist of dry, bland food. One theory is that since any number of ghosts rome around a grave area, the less appealing food will be consumed by the ancestors, and not be plundered by strangers.

Honoring Ancestors
Honoring ancestors begins with proper positioning of a gravesite and coffin. Experts in feng shui, or geomancy, determine the quality of land by the surrounding aspects of streams, rivers, trees, hills, and so forth. An area that faces south, with groves of pine trees creates the best flow of cosmic energy required to keep ancestors happy. Unfortunately, nowadays, with China’s burgeoning population, public cemetaries have quickly surplanted private gravesites. Family elders will visit the gravesite at least once a year to tend to the tombs.

While bland food is placed by the tombs on Qing Ming Jie, the Chinese regularly provide scrumptious offerings to their ancestors at altar tables in their homes. The food usually consists of chicken, eggs, or other dishes a deceased ancestor was fond of. Accompanied by rice, the dishes and eating utensils are carefully arranged so as to bring good luck. Sometimes, a family will put burning incense with the offering so as to expedite the transfer of nutritious elements to the ancestors. In some parts of China, the food is then eaten by the entire family.

Kites
Besides the traditions of honoring the dead, people also often fly kits on Tomb Sweeping Day. Kites can come in all kinds of shapes, sizes, and colors. Designs could include frogs, dragonflies, butterflies, crabs, bats, and storks.

Approximately 1 million people are hoping to come to the march, which is to be held in 10 different locations around the country.

The march is to show the Taiwanese people’s anger at the bill which was passed a few weeks ago, which more or less allows China to use military force if it sees fit.

This event could be quite big, and I am waiting to see how it turns out. This kind of event could get quite nasty. Report more after the event.

You’re so lucky hearing from me so often.

Well, today it became official. China has passed an anti-secession bill, which means that it will be allowed to take military action if Taiwan attempts to claim independence.

There’s an article on the situation at CNN
http://www.cnn.com/2005/WORLD/asiapcf/03/14/china.npc.law/index.html

A little about Taiwan’s turbulent history.

In 1895 Taiwan was taken over by the Japanese, they were terrible and ruled Taiwan until the 1945. Then it was taken back by the GuoMinDang (KMT), who had been in civil war with China since the 30’s. The Japanese forced everyone to learn Japanese and take Japanese names, people were also not permitted to speak Taiwanese, which was the dominant local language. People spyed on each other and reported each other to the authorities if others didn’t obey.

Well, in 1988 the first democratically elected persident came into power. The GuoMinDang won that time too, and for the first time, 5 years ago, another party, called the Green Party won.

One thing that was never made official was Taiwan’s status. During all this commotion, Taiwan never declared independence, despite all the people who ran here from China to escape in 1947.

Officially, Taiwan is a province of China. Taiwanese who go from Taiwan to China have to get a special, “Chinese resident in Taiwan Province” card to get in. But foreigners need a seperate visa for Taiwan (sometimes known as “The republic of China (ROC)”) and China (“The people’s republic of china”).

Taiwan goes about it’s business as though it is a seperate country, having it’s own government and having different laws to those of China. Taiwan’s internal affairs are not much like China’s, especially in regards to the right to express opinions and the like.

But there is a great feeling that Taiwan is a seperate country amongst the people of Taiwan. Many people have expressed hope that Taiwan would become independent. Until now there has been a kind of acceptance of Taiwan as a kind of strange case. China more of less let’s things be, as long as Taiwan doesn’t step too far out of line.

The issue is a matter of face, the whole Chinese relationship issue. China doesn’t want to give Taiwan up, and Taiwan wants to go on it’s own, neither party wants to give up their position.

With the new bill China has said that it might use force, military force, with Taiwan if it officially tries to break away from China. This is quite worrying as things to now have been left and left, without much happening, but this puts a strain on relationships a bit.

Oh, for some fun, compare these two articles about Taiwan’s history (I found these looking for a brief history of Taiwan).

This one written by a mainland Chinese person
http://www.china-un.ch/eng/zt/twwt/t88926.htm

And this one written by an American I think
http://www.worldrover.com/history/taiwan_history.html

Notice how the Chinese guy stands firm and makes clear his loyalty and opinion about Taiwan’s status.

Let’s see how the fun and games play out.

We use cookies to ensure that we give you the best experience on our website. If you continue to use this site we will assume that you are happy with it.Accept